About Our New Game!

After have released our three games one after the other, we lapse into silence. (the calm before the storm?) We have decided to break this silence and share some details about our new game.

We shared two screenshots in our social page in the past few days about the game. Now, we’re presenting a screenshot gallery! 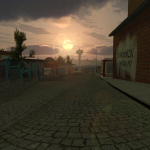 These designs are taken from the real environment. We have make two different choices for the game. One of them is a street in Uskudar, and the other one is a street from Kadikoy. We have pulled out all the stops for the entire structures to be same, even door numbers. On the other hand, we had to a set of limitations and changes -take into consideration the performance of course- because of the project aim for the mobile platform. However, we have make an effort for the environment not to be bruised.

In this context, we have taken an important step in the direction of our team’s objects, while we have been developing the mobile game, which is based on the real environment in Turkey.

As you know, we are an indie development group. And because of that, we’re nonbudgeted. Therefore, we would like to indicate that we taken up many challenges in this process. And unfortunately, the development process taken up more time than we planned  and it was entered the 9th month in these days we are going through. (included pre-production process) Actually, when the Zombie Hell 3 released, we had already started to work for this project.

Anyway, what will our purpose be in these places? Let’s touch on this question. While in the development process, we showed some models to our few friends, their first comment was several questions; like “Where zombies will show up?”, “Where we gonna fight?”, “Who will we fight with?”, etc. For now, we do not intend to fight. 🙂 Our game will be included in the race under the category of parking games.

Forget all the accustomed, ordinary games you’ve ever seen. A quite different game will be waiting for you than the other games, whether game dynamics or places and also resources. As a result of doing extensive searches on the android platform, we’ve noticed just two games, which have a few similarities as against out game. As you guess right know, the game will be released on Android at the start. But after a bit, we will start to work for web and Windows Phone versions.

While we are come to and end of our text, we would like to answer this question: “Which phase the game is in?”

We can say that the environmental design was finished. Otherwise, we’re still carry on to work with last forms of one or two cars. The 85 percent of the hardest part of programming has finished. While the team still working hard to finish the project, on the other hand they entered pre-production process for the new game! We’re refrain from give a release day like many teams. But you had better to make ready your driving licence in late August. 🙂

Hope to see all of you soon in the streets of Istanbul!